It started back in 2015, well before anyone at MACONY Pediatrics had ever heard of the MHQP Patient Experience Awards. Healthcare and social service providers in and around Great Barrington, Massachusetts, were seeing a steady rise in behavioral health issues among the youth in southern Berkshire County, a trend that was highly correlated to increasing poverty levels in the area. 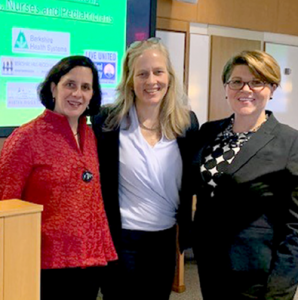 The school system was feeling it. Mary Berle, then principal of the Muddy Brook Regional Elementary School in Great Barrington, part of the Berkshire Hills Regional School District, was on the sharp end of this trend.

“I think we were early indicators for what we’re seeing now in terms of behavioral health across the Commonwealth and beyond,” says Berle. “We had seen lot of changes in the community – middle-class mill jobs closing, real challenges with alcohol and heroin addiction, that kind of thing. We were serving many wonderful children with trauma in their family systems.”

Over a period of four years, the school saw a 700% rise in students with social and emotional disabilities.

The medical system was feeling it, too. Deborah Buccino, MD, lead physician for MACONY Pediatrics, part of Berkshire Health Systems, was on the other sharp end of the trend.

“Behavioral health issues had been increasing in the pediatric world for some time,” says Buccino. “We’d been struggling with so many kids becoming dysregulated and needing services. But when we would make a referral to a behavioral health resource, the family would often come back three months later and nothing would have happened.”

Berle and Buccino knew each other because Buccino had been the pediatrician for Berle’s three children. So, they had a long-standing, trusting relationship. That relationship came in handy when Berle called Buccino at home one evening in 2015.

“I had a family with their child in my school office at 8:00 at night. We couldn’t go home because we couldn’t get resources organized for the child,” remembers Berle.  “And it so happened that the child was one of Deb’s patients. So, I called her up and we worked together to bring supports to the child and family.”

Soon enough, Berle and Buccino started discussing how they could break down traditional siloes to work together to improve the brittle and disconnected support systems that families rely on in southern Berkshire County to access the services they deserve and need for the wellbeing of their children.

“We both committed to try to figure out how to make things better, and while doing that, we were also trying to take care of ourselves. So, we became biking buddies,” recalls Buccino.

While on their many rides, they compared their unique perspectives on the issue, developed a shared understanding of the problem, and started formulating possible solutions. What started to take shape was the foundation of what has now become the Southern Berkshire Collaborative Care Team (SBCCT).

Buccino and Berle, along with other colleagues on the leadership team of SBCCT started looking carefully at the cases of individual patients and what could be improved in the referral system. One of the first things they tried to understand is why so few referrals were resulting in services.

“In that first year, we had somewhere between 30 and 40 referrals to services and only two of them resulted in care,” says Berle.

What they found is that there were often simple explanations for the lack of follow-through, usually unrelated to patient compliance. For example, some families were not getting the referral calls because their pre-paid phones had no minutes available at the end of the month. So, the team sat down with the Crisis Center to unpack what was happening and find better solutions.

They also started to put new pieces in place to improve their own systems. The first piece was to create a Care Coordinator role within the pediatric office to organize resources, oversee cases referred to the Collaborative Care team, and follow-through with families to ensure the proper resources were being accessed. Adrien Conklin, BSN, RN, was the first to hold the position, and she helped define the role for SBCCT.

“Basically, what we did was take the model of care coordination that’s common in the medical system and extend it to include the schools and mental health providers and other community agencies,” says Conklin.

The Care Coordinator talks with the family to understand their situation and hear their needs. This enables the family to have a sense of agency, as opposed to being directed from the top down by the medical provider. The family signs consent to allow the various systems to connect with one another over their child’s needs. Then the Care Coordinator organizes a meeting which includes the family, the school, the pediatric office, and any other community agencies that may be involved in the child’s care. Together, they come up with a unified, coordinated care plan for the child.

“Teachers who are seeing the child every day had one perspective that’s really important, and physicians had the medical perspective,” says Berle. “From the school side, we were running into many situations where we didn’t have the training to know what the best course of action was, especially when medications were involved. It’s been really incredibly helpful to create a team where the family, educators and medical staff work together to make decisions that result in organized, thoughtful, excellent care.”

A Matter of Trust

The next piece was to address the inherent mistrust that many families felt.

“I had students and families who didn’t trust either the school or the health system – for very valid reasons,” says Berle. “And yet, they needed support and care and partnership – authentic, good, respectful partnership. I think one thing you learn when you’re a teacher and a principal for a while is that every parent or guardian wants the best for their children. But they don’t always know how to navigate or they’re facing insurmountable odds of their own.”

SBCCT often brings the intake process for already existing mental health programs into the pediatric office where the Care Coordinator has the backing of the family’s trusting relationship with the pediatric provider. Sometimes the pediatric provider would only need to be in the meeting for five minutes – just long enough to assure the family that the resources are high-quality, reliable and trustworthy, and that the plan for helping their child is sensible and sound.

One of those providers is Yolanda Klein, PhD, a clinical psychologist in the community who sees some of the same patients as Dr. Buccino. The two meet every six weeks or so to discuss their common patients and are also in touch more frequently when needed on specific cases.

“It’s a really good working relationship,” says Klein. “The collaboration that occurs between the school, the mental health providers and the pediatricians is so helpful in this community, especially during the mental health crisis brought on by COVID. Anxiety and depression among young people have been at historic highs during this time.”

One of their common cases is an 18-year-old boy who has been unable to function in his senior year in high school due to acute anxiety issues. Helping him through this challenging time has required a close partnership between his therapist (Dr. Klein), his pediatrician (Dr. Buccino), his parents, and the school counselor.

“We all mobilized to help this young man,” says Dr. Klein. “Ultimately, we worked together to find a tutor since the school had no one available at the time. The team was also able to process the cost through special education funds.”

The Care Coordination program has been so successful that it has expanded beyond MACONY’s four pediatricians to now include the five family practitioners who provide pediatric care at Community Health Programs (CHP) in Great Barrington. So, there are now nine physicians in the network, two care coordinators, as well as other clinicians and dozens of local social service agencies.

“We brought the program to CHP because the school wasn’t served well unless all the pediatric providers that were taking care of kids in the school were involved,” says Buccino. “I think the connectedness really supports the providers giving the care in these challenging cases. It gives them more energy and combats burnout.”

In addition, the program has garnered the attention and support of leaders at the Austen Riggs Center, a private psychiatric hospital in Stockbridge, Massachusetts. They offered some seed money to help get the program off the ground, as well as ongoing consultation and support as part of the Center’s Human Development Initiative (funded by the John and Geraldine Weil Memorial Foundation) to serve the community.

The Yale Child Study Center has taken notice as well and has offered its support and guidance for the program as a model with potential well beyond the Berkshires.

To top it all off, in February, MACONY Pediatrics was recognized with a 2021 MHQP Patient Experience Award for Distinction in Coordinating Patient Care. This means they rated among the top three performers among all pediatric practices in the state on the dimensions related to care coordination, as reported by parents/guardians of patients in the practice. MHQP has been measuring the patient experiences in adult and pediatric primary care practices across the Commonwealth for more than a decade.

“It was such an honor – and a pleasant surprise,” says Buccino. “We didn’t seek out the MHQP award. To be honest, we didn’t even know about it. But we’ve worked so hard to improve care coordination in our community, so that’s the one we would have wanted for sure.”

“It’s heartening to hear parents recognize and appreciate the changes we made,” adds Berle.

At a time when Governor Baker is once again proposing that the state significantly increase its investment in primary care and behavioral health services, the SBCCT program could certainly be an approach that other communities throughout the state can learn from in the challenging months ahead.